It's been about a week since I last posted so I think it's time for an update! Nothing too exciting in my little neck of the woods. I am trying to spend a little more time at home and try to tackle projects. I wasn't entirely productive this past week since I had dinner plans twice. Then I made impromptu plans with a dear friend I hadn't seen in two or three weeks since I was sick so it was time to catch up with him and see what was new. Then I had brunch plans with another dear friend and next thing I know, half the weekend is over! And then I decided I wanted to make a one-pot meal for the week. I don't really like to cook but I came across a recipe for curry shrimp chowder so I made it! It came out yummy although I think it needs something else. I don't know what even though I used 2x the amount of curry powder the recipe called for. I'm much better and intuitive about baking! Cooking...and cleaning up after takes time. Now I remember why I'm not that fond of it! :) And then I just caught up with shows, did laundry, housesat and stitched some on Jane. Oh and I finally put away Christmas. Only took 35 days past Christmas for me to do it. I am so behind in all aspects of life...not just stitching. But I vow to catch up sooner rather than later! 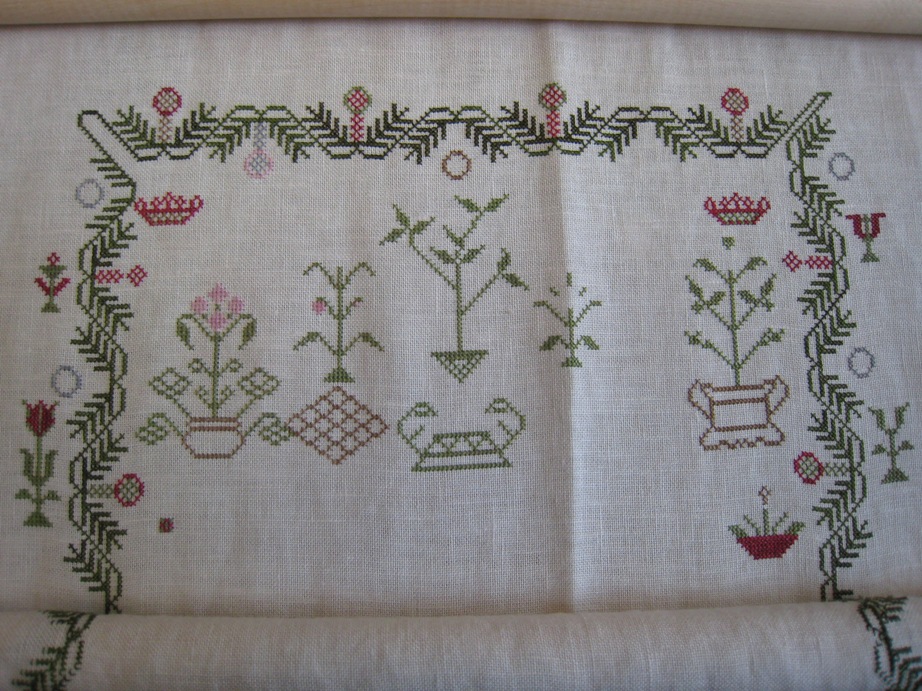 I stitch by color...does anyone else do that? I think most people stitch by motif so I have some incomplete motifs. I really enjoyed working with the medium green in this section despite having stitched with that forest green for months on the pine border. Once I finish this top third, I will whip it off the rods and iron the heck out of that crease. It's driving me nuts but laziness prevails when I think about ironing and then having to put it back on the rods. No fun...so I keep stitching.

As I stitch, I keep thinking about things I want to stitch. At the top of the list are BOAF A Very Fine Sampler, some ornies and Letters to Santa. I still haven't sorted a travel project so Jane has gotten all my attention. A couple more nights and she will be abandoned for social time. I have two happy hours, a possible scavenger hunt, Superbowl viewing (Go NINERS!!) and a movie night. Huh...how did that happen?! At least next week and weekend is looking pretty quiet...so far.

I hope everyone is having a good week so far!

I was lucky that IHSW fell on a weekend where I already had stitch group planned since that meant I would actually get some stitching done. However, the funny thing is that I used stitch group to do some finishing which I can't show...yet. The ladies kept me in check and on task with my finishing despite the amount of whining and bemoaning that was coming from my side of the table. I have to admit that finishing is not my favorite thing to do but my pieces came out lovely...if I don't say so myself...and I learned a new trick or two. That's always a good thing. Never too old to learn new stuff!

Before Saturday, I managed to put in some stitches into Jane. I count the whole week as IHSW because sometimes I don't actually get to stitch on the weekend. Here is how Jane is looking so far. I have to admit that I love all the little motifs. When I finish one, it feels like a little happy dance! 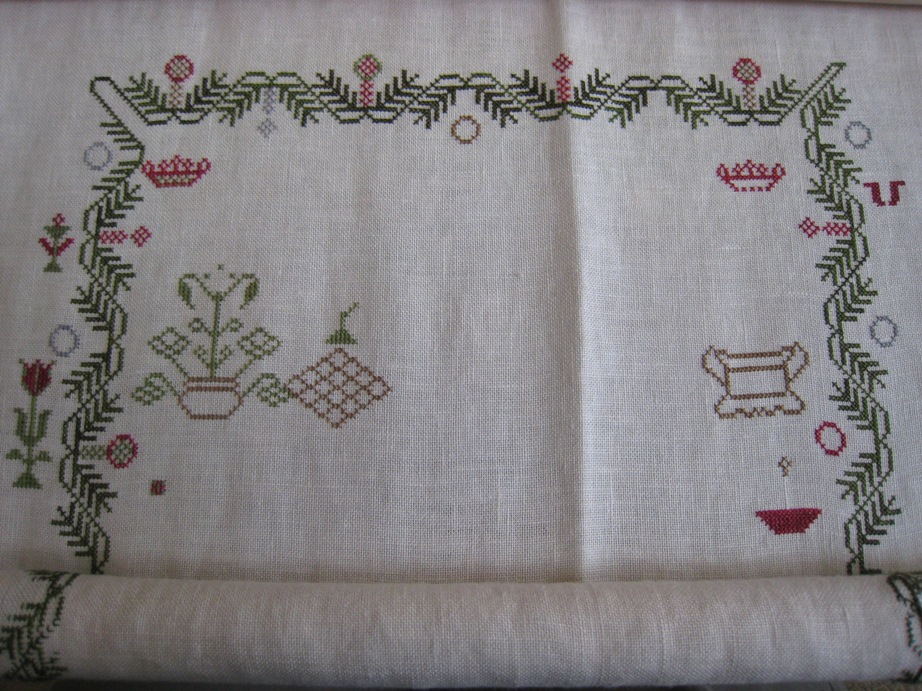 I am trying to figure out what to start as my traveling small. I got all my supplies together to stitch a LHN ornie and then I realized that the piece of Tin Roof Gingham I bought is more greenish than grey. Darn dyelots! I'm not having the best of luck finding a grey-ish hued Tin Roof Gingham. If you all have any leads, please let me know! I was so set on having it look like the model that I don't want to sub for a boring neutral. So I'm in limbo until I have the time to search out the supplies for an alternate start. And when I have a few minutes here and there, I've been winding my DMC threads. So boring and tedious but it will be so worth it to have them all organized and pretty in one place. Right now, my stash is a jumbled up mess. Makes finding supplies for new starts a total drag. How did everything get so messy!?

I am finally better from my cold/flu after two weeks. It was terrible! I missed 4.25 days from work which is usually unheard of for me. Tuesday was the first day where I didn't need any meds. Yay! I do have to admit to being tired though. I have to work on my stamina and work hard at getting at least 8 hours of sleep a night. My body is apparently insisting that I need it!

Hope everyone is having a lovely week!

Happy New Year dear friends! I had hoped to be here at the start of the year with goals and resolutions but time escaped me as usual and I've been down for the count the last six days fighting this cursed flu that is making me miserable and super cranky. Oh my goodness, I've blown my nose at least a million times and sucked on close to 50 throat drops. It has been years since I've been this sick and I even got a flu shot way back in October! I've missed three days of work so far and my co-worker is trying to convince me to stay home for one more day to ensure my recovery. She's probably right but I feel badly being out of the office so many days despite the hundreds of hours of sick leave that I have.

It's already the thirteenth day of the first month of Twenty-Thirteen. How did that happened? At this point, it's useless to list goals and resolutions. I will be super happy if I permanently lose those last five pesky pounds I've been half-heartedly working on and have more finishes than I did in 2012. It was my lowest number of finishes in years. Only five. A little sad I think. This year, I hope to finish Jane Pattison and Fairy Moon and get them framed and hung on my walls. I hope to continue my path to more happiness and friendships. And everything else, will be icing on the cake. I want to keep it simple. Life is too busy and too pressured and I've been pulled in many directions and spreading myself too thin. I hope to find the balance between quiet life and social life that pleases me and provides me with the amount of rest I need.

Nothing too exciting has happened since my last post. For New Years Eve, I went to a fancy schmancy dinner with my social group and was able to see the fireworks show over the bay up close. It was a little weird since my ex was there and it wasn't how I had hoped or imagined NYE would be but I made the most of it and had a friend ensure that I had a good time and I did. I put on a party dress, curled my hair, put on fake eyelashes, made myself up and wore red lipstick. I had fun! It was a great time and I am glad that I went. Not sure if I would do the same scenario again but it beat sitting at home alone watching videos...not that that's a bad thing...just what I have done for a few years running now. Nice to do something different for  a change.

I don't have much worth sharing on the stitching front. However, I did manage to put the final stitches in the piney border of Jane Pattison. I was so happy when it matched up! Whew! 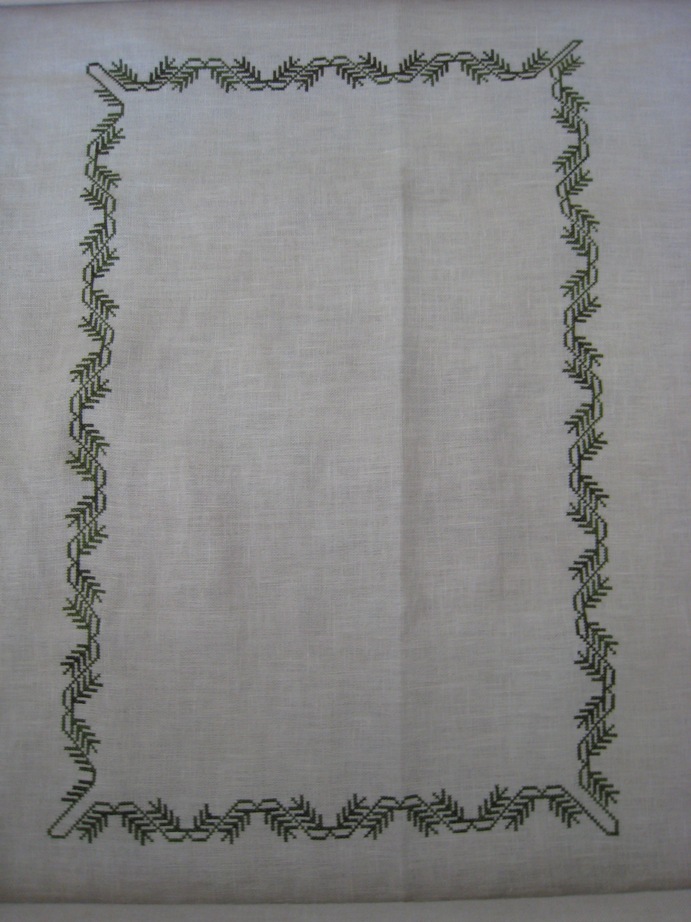 Excuse the bad photo. I really need to take the linen off the rods and press it. I have that annoying crease that won't straighten out! Now it's time to add some color and stitch the motifs. Of course, the color I start off with after all that green is brown. Figures! Not too exciting!

I've been stitching on a little something as well but I can't show it yet. It will be for show and tell at a later time.

And I have my TUSAL to report. I think I waited until after the first of January to remove my old threads from the jar so I have a puny amount to show. 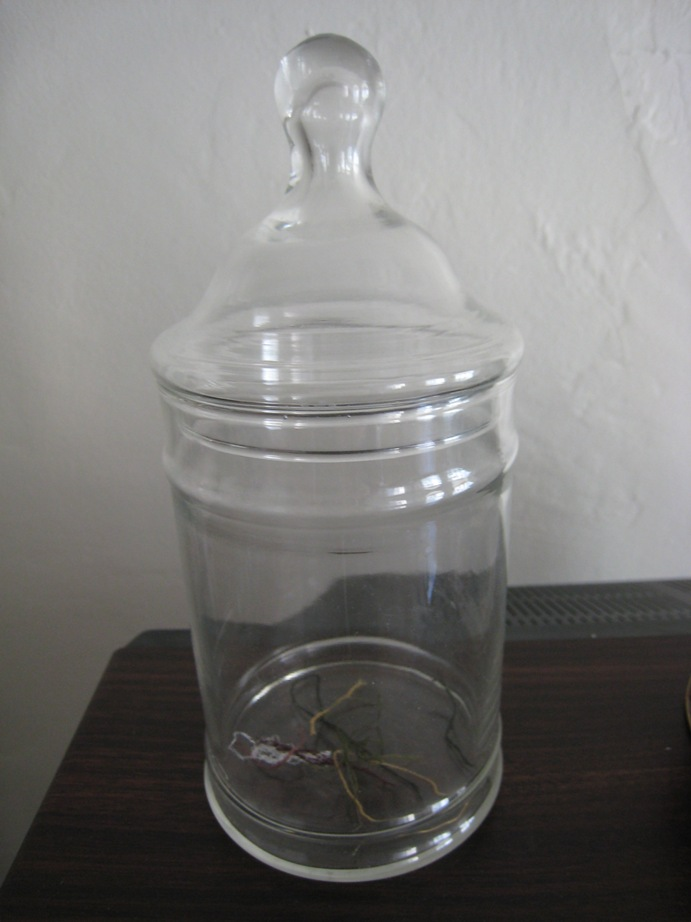 Can you see them? Green from Jane and the rest from the secret stitching.

That's all for today. I hope you've all had a good start to the year and that fellow sickies start feeling better soon too! 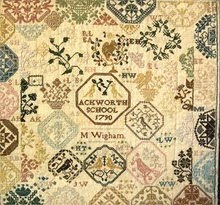